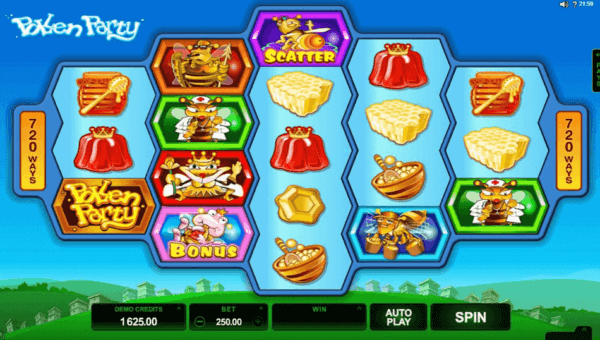 Pollen party pokies is 5 reels and 720 ways to win game from Microgaming. Here you can win honey pot of prizes. In fact, the game’s paytable states that you can win up to 110,000 coins with the Babee Bonus side game. On top of that, game offers up a round of free spins with extra wilds for extra sweet winning opportunities.

So you will find all characters in this game related to bees from the hive that can be seen in action. There are worker bees carrying buckets of honey across the honeycomb shaped reels, soldier bees standing guard over the hive, nurse bees to make sure everyone is in good condition for the hard work of making honey and a queen bee to sit rule over the honeycomb kingdom. Other icons on the reels include jars of honey and even some honey flavoured cereal.

With a mid range variance level, you won’t need to wait for too long before the pokies promises a bit of winning action. The prizes shown in the paytable are effectively represented as total bet multipliers with top jackpot returns of 100x whenever five scatter icons appear on all five reels. After that, the prize winning potential does drop somewhat with any of the three wild icons awarding 10x when they match up on the reels. The minimum total bet available to play with is 0.50 credits with a maximum wagering limit of 250.00 credits.

Pollen Party truly gets into full swing whenever three or more scatter icons appear on the reels in any position. Also with two scatter icons involved in the game, this means that there is double the amount of bonus action to get stuck into. First of all, the game presents a standard set of 12 free spins whenever three or more angry bee scatters appear on the reels. During this gameplay feature, the game will add extra wild symbols over the reels whenever a flower appears in the central position.

You can enjoy some more interactive action with the Babee Bonus side game. This pick ’em feature is activated by finding three baby bee scatters, taking you to a separate side game in which you have to select random honeycombs for the chance to win bonus prizes. The bonus game continues until the “Pop” icon is uncovered.