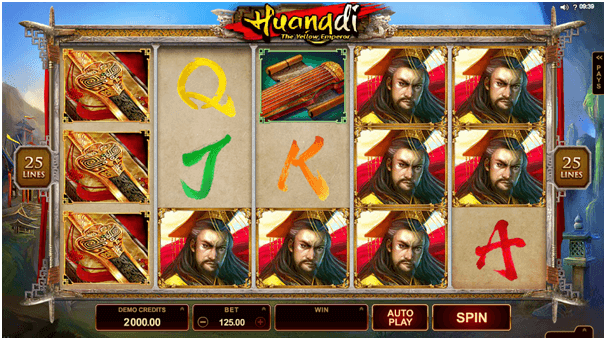 Huangdi -The Yellow Emperor is a 5 reel pokies by Microgaming that recounts the story of the mythical sovereign of the Asian world and national icon of modern day China. With 25 paylines on the board, this game has number of special gameplay features with stacked symbols and expanding reels, not to mention wild wins and free spins.

As you spin the reels you will uncover key items and characters from the legend of Huangdi, from ancient Chinese scrolls and instruments to beautifully adorned golden swords and treasure chests. With 25 paylines and a low variance gameplay, you will find that these icons form into winning combinations on a fairly regular basis. The downside to this is that the size of the prizes are generally quite low in comparison to other video pokies

The 25 paylines are permanently fixed, meaning that you will be able to place minimum total bets of 0.25 and big maximum bets with a top limit of 125.00 credits.

There are some standard icons such as a wild logo symbol that will substitute for any other icon except for the game’s scatter symbol. That is because the scatter doesn’t need to appear on a payline to award wins worth up to 100x the value of the total bet. Not only that, but three scatters will trigger a round of 15 free spins, during which the wild icon will always be stacked on the first reel of the game.

Also there are plenty of other bonus elements during the base game and it involves more stacked reels and expanding symbols. This feature is triggered whenever a full stack of matching symbols appear on reel one, causing all other matching icons of the reels to expand. As such, this gives you the chance to stack up some very big winning totals.