Emperor Of The Sea pokies Review 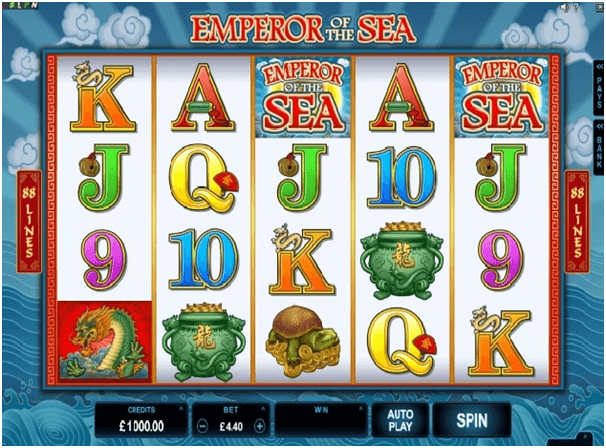 Emperor of the Sea  pokies games is where you explores the maritime culture of historical China in  5 reels and 88 paylines video game. You will discover some of the precious symbols that depict magnificent jade vases, interesting statuettes of turtles and incredibly valuable golden sycees – an old form of currency used in the oriental world and much more

Some of the other icons on the reels also reveal some water-dwelling beasts which are symbolically important in Chinese culture, from the humble koi carp to the almighty sea dragon, both of which are symbols of good fortune and prosperity.

There are 88 paylines in total, which may appear like an odd number although it has plenty of significance since this is considered to be the luckiest number in Chinese culture. With all paylines in play, punters can place a minimum bet of just 0.88 and a maximum bet of 44.00. The biggest win of all in this mid to high variance video pokies comes in the form of a 100x total bet multiplier. In order to land a prize of that size, you will need to find five golden sycee scatter symbols in any reel position.

Finding five scatters in this game will award the biggest prize return but it will also trigger a round of 8 free spins. In fact, finding just three scatter symbols in any position on the reels will activate this bonus gameplay feature which involves “Rolling Reels” and “Growing Wilds” for extra winning opportunities.

The Growing Wilds element adds extra wild icons to a stack of wilds with every consecutive spin up to a maximum of 15. This means that there will be a very likely chance for players to complete winning combinations since the wild will substitute for any icon except for the scatter.